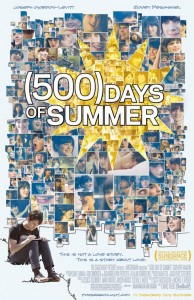 Mark Webb’s first full feature length film was nothing short of spectacular! I enjoyed it from beginning to end. I re-watched it with Jeff over the weekend and he liked it too.

Does destiny play a role in who we end up falling in love with? Tom and Summer have different answers to this question.

The movie opens with the following quote:This is a story of boy meets girl. The boy, Tom Hansen of Margate, New Jersey, grew up believing that he’d never truly be happy until the day he met the one. This belief stemmed from early exposure to sad British pop music and a total mis-reading of the movie ‘The Graduate’. The girl, Summer Finn of Shinnecock, Michigan, did not share this belief. Since the disintegration of her parent’s marriage she’d only love two things. The first was her long dark hair. The second was how easily she could cut it off and not feel a thing. Tom meets Summer on January 8th. He knows almost immediately she is who he has been searching for. This is a story of boy meets girl, but you should know upfront, this is not a love story.

The soundtrack was amazing! Some of my favorite artists including: Regina Spektor, The Smiths, Black Lips, Zooey Deschanel, Doves and Temper Trap…to name a few.

I think this would be a good movie to watch on Valentine’s Day if you want something a little more interesting than the tired “Boy Meets Girl” movies that Hollywood usually recycles this time of year.