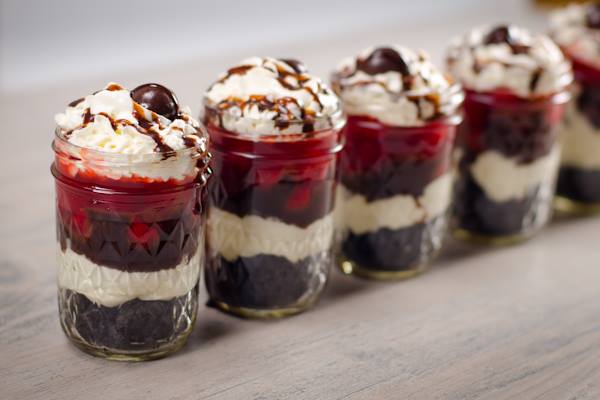 Are you ready for another amazing cheesecake jar dessert? Everyone loves the Blueberry Cheesecake Jars, Banana Cream Pie Jars, and the Pumpkin Pie Cheesecake Jars so much, I just couldn’t resist creating another one. This one would be particularly pretty for Christmas or Valentine’s Day! If you like chocolate covered cherries, Oreos, and cherry cheesecake as much as I do, then you’re going to love Chocolate Covered Cherry Cheesecake Jars!

Combine in a medium mixing bowl, and then divide evenly between 6 half-pint canning jars.

for the cheesecake layer:

Using an electric mixer, combine all ingredients in a medium mixing bowl until smooth. Divide cheesecake filling evenly between the jars, on top of the cookie cracker crust layer.

for the chocolate cherry pie layer:

6 to 12 Tablespoons chocolate syrup (such as Hershey’s}

Squirt desired amount of chocolate over cheesecake layer, followed by a layer of cherry pie filling. Cover and refrigerate until ready to serve.

To serve: Remove jar lids, and top desserts with a dollop of sweetened whipped cream, a drizzle of chocolate syrup, and a chocolate covered cherry!