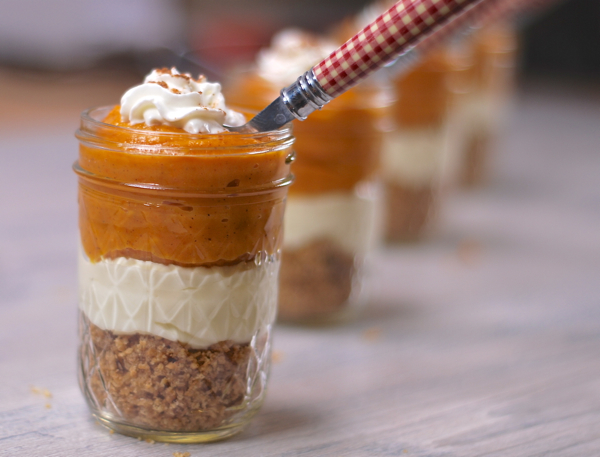 Cheesecake jars are such a fun, easy way to serve dessert. Everyone enjoyed my Blueberry Cheesecake Jars so much, I decided it was time to make a pumpkin pie version. We love these pumpkin pie cheesecake jars for Halloween, Thanksgiving, and Christmas! They’re delicious and portable, so if you have to travel for the holidays, you can simply pack these in a cooler and go. Easy peasy!

for the graham cracker crust layer:

Combine all crust ingredients in a medium mixing bowl, and then divide evenly between 6 half-pint canning jars.

for the cheesecake layer:

Using an electric mixer, combine all ingredients in a medium mixing bowl until smooth. Divide cheesecake filling evenly between the jars, on top of the graham cracker crust layer

for the pumpkin pie layer:

Place all in a bowl and stir, using a wire whisk, until smooth. Top the jars with this mixture. Cover and refrigerate until ready to serve.

To serve: Remove jar lids, and top desserts with a dollop of sweetened whipped cream and a sprinkle of pumpkin pie spice.