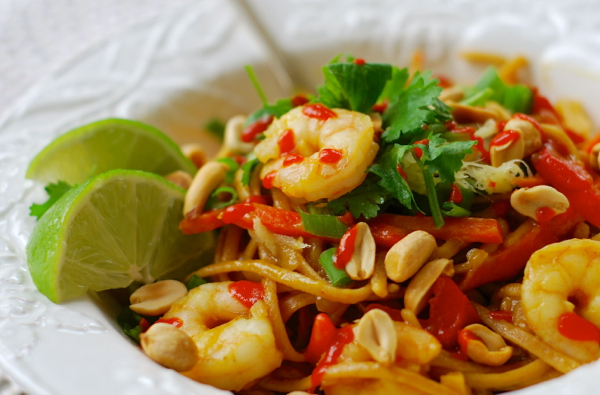 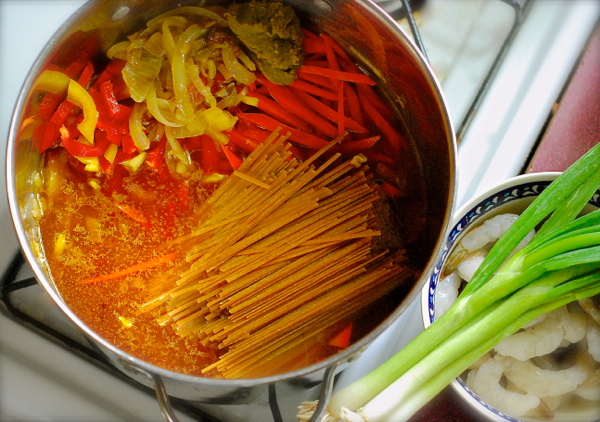 My last Magic One Pot Pasta recipe was such a hit, I had to create another one to share! This turned out amazing too, and so easy! I know that traditional Pad Thai calls for rice pasta noodles, but I was afraid they wouldn’t hold up for this recipe so I used my favorite, whole grain linguine, and it worked perfectly!

For more on peanut sauce in Thai cooking you may want to read THIS article.

For the Magic One Pot Pad Thai:

1/2 of a yellow bell pepper, halved and sliced thin

1/2 of a red bell pepper, halved and sliced thin

Heat olive oil in the pot. Once hot, saute the onion in it for 10 minutes. Add garlic. Saute an additional minute. Add: noodles, ginger, peppers, carrots, Pad Thai sauce, chicken stock, Sriracha, red pepper flakes, curry powder, sesame oil, curry paste, and cinnamon. Turn up heat to high, cover and bring to a boil. Once boiling, lower to a simmer, and cover with lid askew so steam can escape. Cook this way for 10 minutes, stirring every 2 minutes. Add the shrimp. Cook an additional 5 to 7 minutes, stirring every 2 minutes, or just until noodles are al dente and most of the liquid has evaporated. Some liquid is good and makes a delicious sauce for the noodles. Plate and serve with desired garnishes (listed above.)

For the homemade Pad Thai Sauce:

Place all sauce ingredients in a canning jar with a lid and shake well. Refrigerate until ready to use.