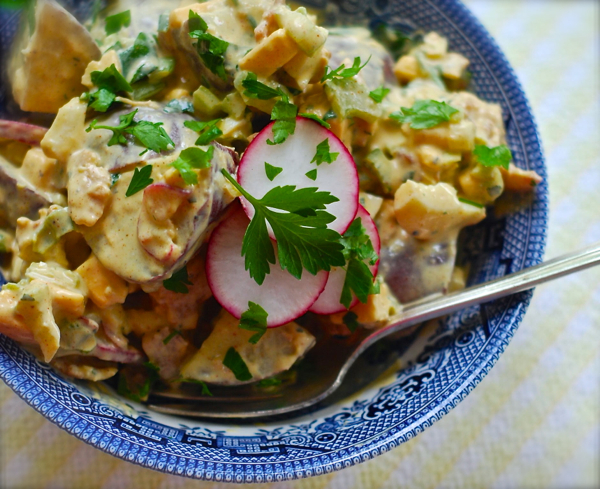 We walked back and forth between our houses twice today. We live about 2 miles apart, which wouldn’t really seem like a big deal if it wasn’t 85 degrees outside, but it WAS. So, on our first jaunt we put the grand girlies down for a nap, watched THIS MOVIE again, and had lunch at Andie’s. She made spaghetti and then realized she was out of Parmesan cheese. She laughed and said, “I have Kraft singles!” So we put them on top of our pasta in lieu of the traditional choice. She laughed as she served me a plate and said we should call it ‘Spaghetto.’ LOL… And then we laughed the rest of the way through lunch. The dish was improved after adding a copious amount of Sriracha. Okay, maybe you just had to be there. 😉

Speaking of my darling daughter, Andie… She told me about a new favorite potato salad of hers that she tried after visiting a local deli. She described it as being smoky and bacony and perfect. It’s called Steakhouse Potato Salad. Here’s my interpretation (She tried it and says it’s a very close replica…)

Place baby potatoes in a large pot of boiling water and cook until firm/tender (about 20 minutes, or until you can easily pierce the potatoes with a fork.)

Place potato pieces on cooling racks over baking sheets to cool quickly. Once cool, place in a large mixing bowl.

In another mixing bowl, combine the rest of the ingredients. Mix very well and toss gently with the potato pieces. Cover and chill in refrigerator until ready to serve.