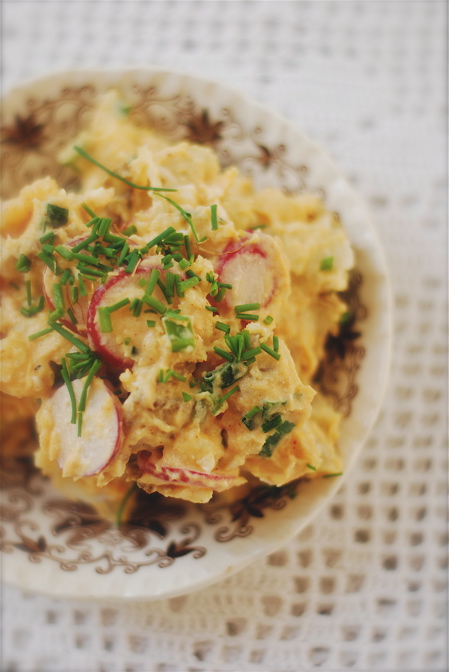 Wow! Yesterday I asked my readers on facebook if they like their potato salad with or without mustard, and the responses started pouring in! I knew people were passionate about this, but I had no idea they cared that much.

I promised to post my favorite recipe for potato salad today, and to reveal whether or not I include the yellow stuff in mine.

No. I do not. I think mustard is for hot dogs, not potato salad. hee hee. 😉 same goes for relish. A few of my facebook peeps like chopped up pickles in theirs. Hmmmmm….

I think it all has to do with what we got use to as kids. My Papa, in my opinion, makes the best potato salad in the universe. It’s simple and fantastic. Hope you give it a try and see for yourself, even if you’re a mustard fan.

2 cups real mayonnaise (or a little more, if needed) we use Hellmann’s

Wash and peel potatoes (or leave them unpeeled if you like the skins.) Cut into big, uniform chunks and place in a large pot of boiling water. Boil until fork tender…don’t let them go until they’re mushy. Peel the eggs and chop them up (or just slice them if you like bigger pieces.) Place them along with the green onion, and the radishes, in a big mixing bowl.

Once the potatoes are done, drain them well and allow them to cool. (I remove them to seperate bowls so they cool faster.) Once cool, cut into uniform, bite size pieces and put them in the bowl with the eggs and veggies. Carefully and gently stir in the mayonnaise. Season with paprika, salt and pepper to taste. We like a lot of paprika, but it’s totally a matter of preference.

Transfer the potato salad to a bowl with a lid and chill completely before serving.

Hope you love this as much as we do!