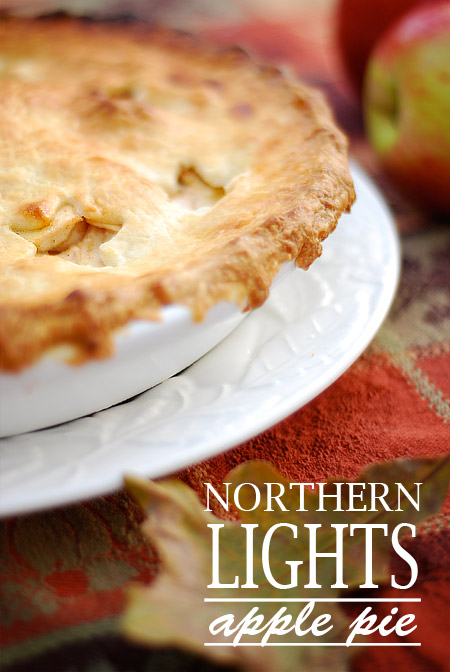 “You can’t have Thanksgiving without turkey. That’s like Fourth of July without apple pie, or Friday with no two pizzas.” Joey from the television show Friends

After spending a lovely afternoon at our new favorite orchard in Prescott Wisconsin, I decided to make an apple pie using Northern Lights apples. These apples are not too tart, and not too sweet and I think they make a perfect apple pie filling. Jeff and Gracie agree. The pie was demolished in 2 days.

Start with the recipe for my no fail pie crust.

Wash, peel, core and thinly slice apples. Place in a large bowl and gently toss with the sugar, flour, cinnamon, nutmeg, ginger, salt and lemon juice. Place one pie crust in an ungreased, glass pie plate. Press firmly against bottom.  Spoon filling into crust. Top with second crust. Wrap excess top crust under bottom crust edge. Press edges together to seal. Flute. Cut slits or shapes into top crust to vent (this time I used a miniature star cookie cutter.) Bake 40 to 45 minutes or until apples are tender and crust is golden. Cover edge of crust with 3 inch wide strips of foil after the first 20 minutes of baking to prevent edges from burning. Cool on a wire rack at least 2 hours before cutting and serving. Enjoy with vanilla or cinnamon ice cream and a little caramel sauce drizzled over the top.