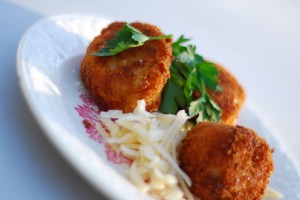 “Noncooks think it’s silly to invest two hours’ work in two minutes’ enjoyment; but if cooking is evanescent, so is the ballet.” ~Julia Child

I made risotto for the first time a few nights ago. Before this I could never really understand what all the fuss over making risotto was about. I’d had it in restaurants and balked at the price on the menu… I mean, what the heck? It’s just rice, right? Wrong. It’s a dish that has to be babysat the entire time it’s being cooked or it will turn into a sticky, inedible glob. It’s not a difficult dish to make, just tedious and putzy.

So as I stood there, stirring, and stirring, and stirring… I was thinking, “This is the last time I’m making THIS!” It did turn out really good though. A smooth, sort of cheesy rice is how I’d describe it to someone who’s never tried it before. Although it was delicious, I still didn’t think it was worth the trouble, so I just chalked it up to a good experience to have had once as a cook, and moved on to the next dish.

Jeff absolutely loved it and happily ate the leftovers a couple days in a row. I didn’t know when I cooked it how much it was going to make, and decided to just make the whole bag. Well, it makes a LOT. So even after a couple days of enthusiastic risotto eating, we still had  a bunch left.

I decided to try making these little risotto fritters out of the rest. When they were done Jeff sampled one and gave me that look that let me know I’d be making risotto again, because without risotto there wouldn’t be risotto fritters. If I come up with a short cut I’ll let you know. Until then you’re going to have to start with leftover risotto, made from scratch. Mine was made with white wine, garlic, and some Italian spices. These little appetizers are to die for. SO yummy! 🙂

Mix the risotto and gruyere together in a mixing bowl. Beat one of the eggs and combine with risotto, stopping when damp but still firm enough to be shaped (like the consistency of a meatball.) Take a heaping tablespoon and roll it into a ball. Poke a hole in the center and push a cube of cheese into it. Close hole to seal in the cheese. Repeat until you have used all the risotto and cheese

Pour an inch of olive oil in a heavy skillet. Heat until almost smoking. Fry the fritters in small batches. gently moving and turning them in the oil until they’re an even, golden brown. Each batch takes about 2 minutes. Transfer to a paper towel lined plate. Eat while they’re still hot, or at room temperature.