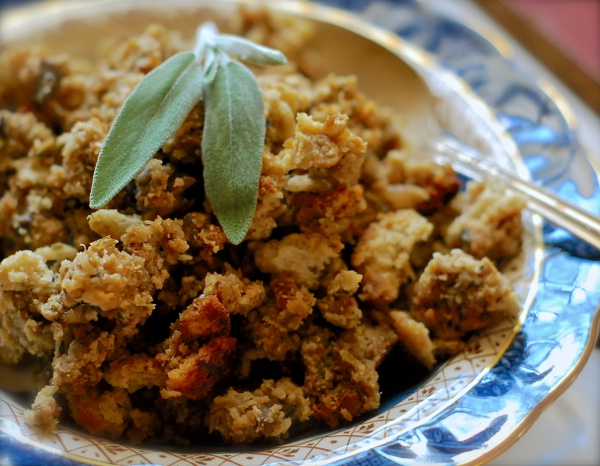 Hello, Lovelies! Are you excited to start celebrating the holidays this year? We still have to go out and get our tree! We’re a week late, so I’m sure we’ll be getting one tomorrow. I still have lots of decorating and baking to do too. How about you? Are you one of those totally organized people who has everything done already? For me those organized years ebb and flow. So far this year I’m feeling behind. Oh, well.

Anyhoo…This year for Thanksgiving, instead of making my sausage and cornbread stuffing, I made sage and giblet stuffing instead. It had been years since I’d had it, and something different appealed to me and my family this year. The combination of flavors in this stuffing  remind me of my childhood. Fresh sage and giblet stuffing is a tradition here in the Midwest, just like cornbread stuffing is a tradition in the south. I know on the east and west coasts some people like oysters in their stuffing. A friend of mine adores chestnuts in his. What do you like in yours?

1 to 1 and 1/2 lb. turkey or chicken giblets (gizzards and hearts), trimmed of gristle, chopped into small, uniform pieces

2 and 1/2 cups turkey or chicken stock/broth

salt and pepper, to taste

Place a couple Tablespoons of butter in each of two large, heavy bottomed skillets. Once butter is melted and hot, turn flame to medium heat and divide the chopped onion and celery between the skillets. Saute until tender and translucent. Add onion and celery mixture to the stuffing mix in the bowl.

Add another Tablespoon or two of butter to one of the skillets and scrape up brown bits left behind from the vegetables. Add prepared giblets and saute until completely cooked through. Add giblets to stuffing. Stir everything until well combined. Melt the remaining butter. Add it along with the sage, thyme, stock, onion powder and garlic powder, to the bowl. Using clean hands, mix well until everything is completely combined and all ingredients are evenly incorporated.

Place stuffing in an air-tight container in your refrigerator until ready to cook.

Stuff bird as you usually would (you’ll have lots extra), or place all stuffing in a roasting pan. Cover and bake in a 350 degree F. oven, for 30 to 40 minutes, or just until heated through.