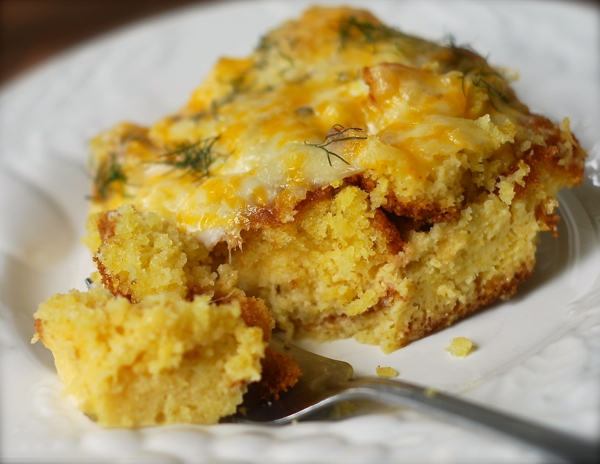 This is a heavenly, savory pudding with lots of gooey cheese. The cornbread and eggs puff up while it bakes and create a fluffy “feather bed” of deliciousness. Serve with freshly squeezed fruit juice (we like passion fruit-pineapple,) candied bacon, and tea. This recipe was loosely adapted from one of my favorite books, Soup & Bread, by Crescent Dragonwagon.

1 recipe skillet-sizzled buttermilk cornbread (made the day before)

Make the cornbread the day before you want to make this breakfast bake. Crumble the cornbread into large chunks on a platter and cover with a pie screen. Allow to sit out to dry on your counter overnight.

Whisk the eggs, cream, milk, yogurt, Sriracha and Worcestershire sauce in a large mixing bowl. Beat well. Pour this evenly over the cornbread and cheese. Sprinkle with the fresh dill.

Bake until the eggs are set, the top is a light golden brown, and slightly puffed. (Approximately 30 minutes.) Take care not to over-bake.

Cut into squares, plate and serve. Salt and pepper to taste. Drizzle a little extra hot sauce over the top, if desired.