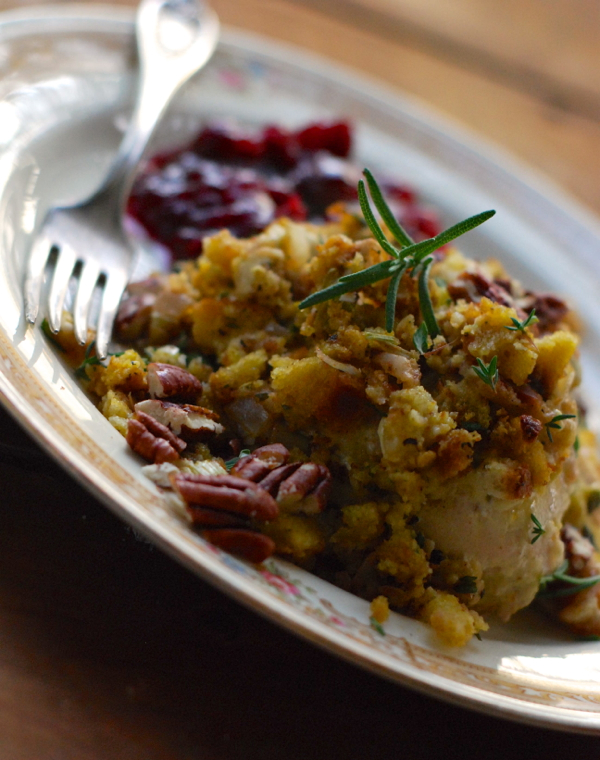 This is one of those dishes I’ve never shared because it’s so easy I just assumed everyone already knew about it. It’s loosely adapted from a recipe I got off the back of a Stove Top Stuffing box. I played with the recipe, doctored it a smidge, and made it my own. If you’re in a hurry, skip the sauteeing of the apples/onions/celery and add them to the stuffing raw. Or, just eliminate them all together. It’s WAY better when you do this step, but sometimes when you’re in a hurry you have to make sacrifices. You can start with frozen, boneless, skinless chicken breasts and just throw everything on top of the chicken and bake it. I personally think you save time by thawing the chicken first, but it’s up to you. Either way, you’ll know the chicken is done when the juices run completely clear.

I started making this when Jeff and I were first married and I was clueless in the kitchen. In those days I burned Kraft mac & cheese, left Easter ham in the plastic wrapper, made a Pyrex bowl explode by putting it on a burner that was still on, got Dream Pie filling splatters on the apartment kitchen ceiling because I forgot to turn the electric mixer off before I lifted the beaters out of the bowl…. Yeah. What a mess. I’d like to think I’ve come a long way since then, but then I’ll do something like over-fill a cake pan, and get it all over the inside of the oven, and I’m humbled all over again.

This is seriously so delicious I’ve made it for small Christmas dinner parties. If you’re looking for complicated, this isn’t it. Of all of the things I’ve made during our 18 years of marriage, this is still one of the hubby’s favorites.

1 (10 oz.) can creamy mushroom chicken soup (OR use this recipe if you don’t like canned soup)

craisins or raisins (or other dried fruit)

a sprig of fresh rosemary or other herb for garnish

Butter a 9 x 13 cake pan. Place the chicken breasts in the pan. Combine the cream soup and the sour cream and spread it over the chicken breasts. Mix the stuffing mix according to package directions, but don’t cook it. Add the garlic powder, pumpkin pie spice, paprika and sage. Mix well. Set stuffing aside. Saute the apple, onion and celery in the olive oil until tender and translucent. Add the apple mixture to the stuffing. Mix well and sprinkle the stuffing evenly over the chicken breasts. Bake in preheated oven for 30 to 40 minutes (for chicken that’s been thawed before hand) 45 to 60 minutes (for chicken that went into the oven frozen.) Don’t cover. Chicken is done when juices run clear.

To plate: Give everyone a chicken breast with some of the sauce and stuffing on top. Offer chopped nuts and/or dried fruit (such as raisins/craisins) for garnish (don’t add the nuts and fruit before baking or they’ll burn)… Place an herb sprig on top to make it pretty. We like this served with whole cranberry sauce and baked sweet potatoes.