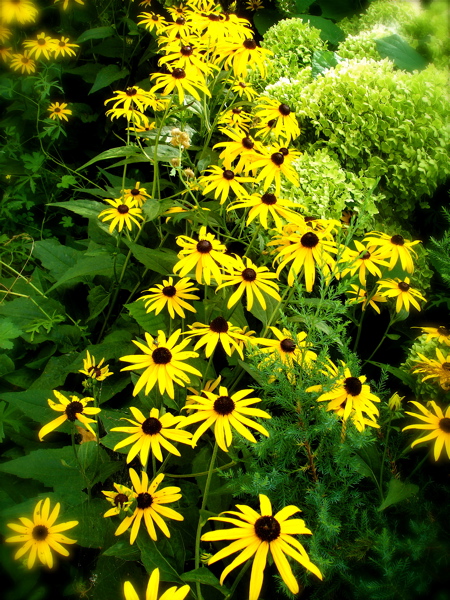 ~Scenes from a Front Porch in Autumn~
by Sandy Erdman

As we remember enjoying the summer parade from the front porch, life has slowed down with the arrival of Autumn.  The porch continues to be a favorite gathering place for our family and friends, even if the chill of fall has settled in.

The front porch, adorned with wicker rocking chairs and footstool, invites us to settle in. A creaky porch swing provides a comfortable place for reading or a quaint place to enjoy a cup of coffee with a neighbor.

In a cozy corner on the front porch, two adorable fluffy black kittens cuddle close to their mother and snuggle in to keep warm for a peaceful afternoon nap so safe and warm, you can almost hear their gentle purr.

A fall front porch picnic is set out, a hand sewn quilt is spread on the floor as well as a basket full of apples from the farmer’s market. The heavenly scent of homemade molasses cookies and breads linger in the air as hot apple cider is served. Crisp fall leaves have blown onto the porch around the pumpkins and berry garland.  A fall wreath hangs on the door and a willow tree grows close by. Everyone shares the moment of togetherness. As the afternoon sun disappears into the evening, the family sits on the porch. Bingo, the golden lab, lounges where he knows he shouldn’t be, on the beautiful, time worn, black wicker settee, enjoying the evening air with the peaty smell from a neighboring fireplace. Everyone is cherishing the memories that are being made, for it’s the coziest time of the year.

Throughout the history of architecture, trends have come and gone.  The impressive white columns of Greek revival mansions gave way to the elaborate decorated trim of Victorians, which in turn changed to the ease of the one story bungalow.  But through all those transformations in style, one element has remained: the porch.

Porches have been in use since the earliest buildings.  Egyptians, Greeks and Romans found the porch well-suited to their sun soaked climates.  While largely out of fashion during the Middle Ages, porches and balconies found themselves in widespread use during the Renaissance.  The roots of our American porches don’t appear to be found in Europe, but rather in the architectural heritage of colonial trading partners.  Traders en route from the Caribbean to the British, French and Spanish colonies were influenced by island architecture, rich with large open porches to accommodate the humid climate.  Little by little, primarily in the south, colonists began to incorporate porches in their home designs with the mix of tropical influence with European classic.  In Virginia, porches often took on the look of their ancestors with two symmetrical stories flanked with columns.  The classical porch was also popular in Charleston, blended with the climate sensitivity of the Caribbean building tradition to create regal double story porch plazas. French settlers in the south also found the swampy climate of the low country suited to their elevated country homes with wide porches and pavilion roofs. The Spanish settlers on the West Coast and in the Southwest brought knowledge of porches and balconies from their native country.  Second story porches, often spanned the width of the house and were both practical and widespread with corridors running along the back of the house which became commonplace in Spanish America.

The American fascination with Victorian architecture became the inspiration of the Arts & Crafts bungalows and the Prairie-style homes of Frank Lloyd Wright; although in a direct contrast they were the last major historical architectural style in the United States to incorporate the porch.  Instantly recognizable for their prominent deep, wide porch which reach out from under his signature cantilevered roofs Wright had the tendency to transfer the porch from the front to the side or back of the home trying to keep in touch with the outdoors.

As America grew and industrialization created a larger white collar job market  the American leisure class had more time to spend with family and neighbors along with the love of the outdoors making porches a popular gathering place.  Soon streets filled with noisy automobiles, television and air conditioning, and more focus on work than leisure time on the porch.  But the underlying love for the porch never faded and is now back as a symbol of traditional American values.

A porch doesn’t have to be an exact, formal structure with large columns and wide steps, but some resemblance of a temporary point between the outside and the doorway into your home, such as a stoop, patio, sunroom, gazebo or a deck.

The elements that make a porch special are your collections and memories. These are the things that transform this mere structure on your house into the unique reflection of you and your home. A porch can be a wonderful place to relax all year long. A place to spend your leisure time with family, friends, neighbors and of course Fluffy and Bingo…

12 comments for “the front porch ~ by sandy erdman”