“Red Wing’s historic Sheldon Theatre of Performing Arts is committed to showcasing the best arts and entertainment for the enjoyment, education, and enlightenment of the community and its visitors.” ~The Sheldon Theatre website 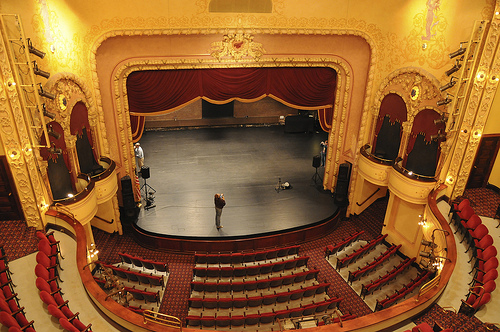 The Sheldon Theatre is the “Jewel Box” of Red Wing

Would you like to visit a gorgeous landmark while visiting Red Wing? Our theatre has an amazing history…

Jeff and I have visited the Sheldon on numerous occasions over the last 10 years we’ve lived in Red Wing, and seen numerous memorable performances. When the Guthrie was still traveling to our quaint little town we saw A Midsimmer Night’s Dream and Ah, Wilderness. We’ve also seen Othello, How to Talk Minnesotan, Defending the Caveman, Doc Watson, and tributes to the Beatles and Frank Sinatra. We’ve celebrated many anniversaries and birthdays at this beautiful theatre.

The Sheldon Theatre is featuring “Your Favorite Musicals” film series this summer, and I am looking forward to attending the next two showings with Gracie. Both movies are 1951 films:

In the end of the Nineteenth Century, the show boat “Cotton Blossom” owned by Captain Andy Hawks flies along the rivers in the South of North America with the lead stars Julie LaVerne and her husband Stephen Baker and musical entertainment. When Julie and Stephen are accused of miscegenation, they have to leave the boat, and Captain Hawk’s daughter Magnolia and the gambler Gaylord Ravenal take their places.

Winner of six Oscars, including Best Picture and Screenplay, this musical triumph stars hoofer Gene Kelly as a struggling American artist torn between a wealthy American woman and a French dancer.


I’m also excited to see Singin’ in the Rain in July, and Little Shop of Horrors in August.

Hope to see you soon!