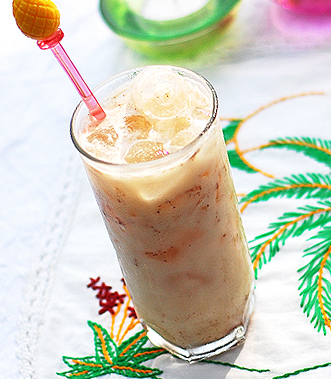 After hearing my new favorite band, Vampire Weekend, sing a song about a beverage called horchata I became curious. What is horchata? So I looked it up and found out it’s a rice and milk based drink that’s enjoyed in Spain, Mexico, and southern California. I made up a batch over the weekend. It’s surprisingly refreshing and pretty easy to make. Gracie absolutely adores it! Try it for yourself!

Pour the rice and water into the bowl of a blender. It will be quite full. Cover and carefully pulse the blender for about a minute, just to break up the grains of rice a little. Allow rice to sit in the water for 3 hours. Drain the rice water into a glass pitcher or large jar. Discard rice. Add the milk, vanilla, cinnamon and sugar to the rice water. Cover and allow to chill completely before serving over ice.