I just finished season 5 of the television show LOST on DVD last night and immediately decided to start watching season 6 online because I couldn’t stand the suspense! The show is absolutely fantastic. If you’re looking for a little ‘island getaway’ while the snow is still melting outside, this will be the perfect distraction. Full of action, suspense, romance and lots of picturesque scenes of Hawaii’s island of Oahu. 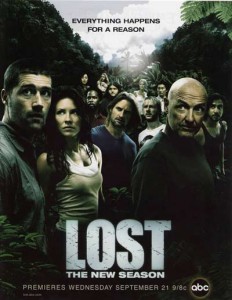 After Oceanic Air flight 815 tore apart in mid-air and crashed on a Pacific island, its survivors were forced to find inner strength they never knew they had in order to survive. But they discovered that the island holds many secrets, including the intense howls of a mysterious creature stalking the jungle, as well as a polar bear, a marooned and crazy French woman, a mystical boar, a mysterious group known only as “The Others,” a ship called The Black Rock and… a hatch.

As the days slowly turn into weeks, the survivors dig deeper in the many secrets of the island and then six of them manage to find their way home — but we soon learn that was the worst thing that could have happened…