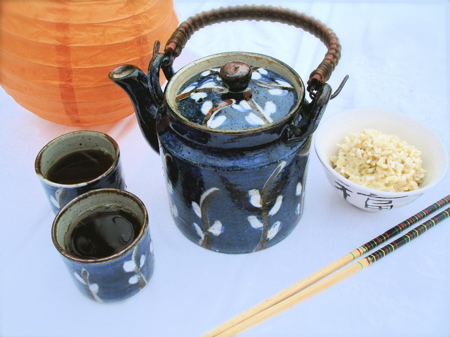 Oolong tea leaves are semi-oxidized and are mainly cultivated in China and Taiwan. They are first exposed to warm air which causes them to wilt and then tossed in big bamboo baskets so the edges become bruised. The end result is this unique, richly flavored tea.

The legend behind the name: Legend has it that a tea grower in the Fujian province of China would stroll past an iron statue, Kuan Yin (The Iron Goddess of Mercy) on his way to work in the tea fields each day. The statue stood in an old, run-down temple. The tea grower decided to wash the statue and lit some incense at her feet.

One night while he was asleep, the goddess appeared to him in a dream and told him to look for a treasure behind the temple. On his way to work the next day he decided to check. What he discovered was a single tea shoot which he cultivated and named Iron Goddess of Mercy.

Tip- Most Oolong teas can be brewed two or three times

Iron Goddess of Mercy tea is the most common Chinese Oolong.

What’s in your teacup?
~Melissa