I was paging through some old copies of  Country Living magazine and came across this cute idea from the September 2006 issue. It’s such a fun, useful idea that I had to pass it your way. 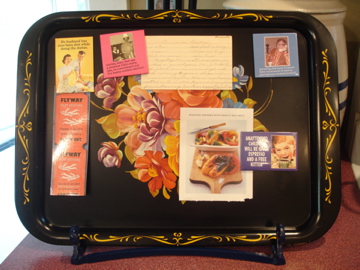 Repurpose decorative metal serving trays as magnetic memo boards. Use them to hold to-do lists, invitations, or newspaper clippings of upcoming events you’d like to attend. I took the idea one step further by propping the tray up on a recipe book holder and sticking my recipe for cinnamon apples on it. This makes it so much easier to see the recipe. The original idea in Country Living shows the metal tray propped up against a wall .

Have a beautiful weekend friends!