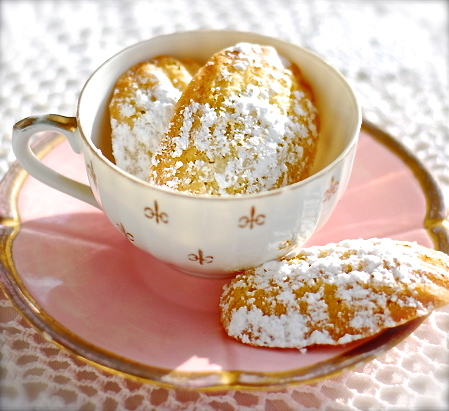 The classic French tea treat. Madelines… a cross between sponge cake and a cookie. Lemony, buttery and perfect with a cuppa. This little dessert inspired a beautiful, almost poem like memory in Swann’s Way, Remembrance of Things Past by Marcel Proust…

…She sent out for one of those short, plump little cakes called ‘petites madelines,’ which look as though they had been moulded in the fluted scallop of a pilgrim’s shell…I raised to my lips a spoonful of tea in which I soaked a morsel of the cake. No sooner had the warm liquid, and the crumbs with it, touched on my palate than a shudder ran through my whole body, and I stopped, intent upon the extraordinary changes that were taking place. An exquisite pleasure had invaded my senses…”

Heat oven to 350 degrees F. Melt butter in a saucepan until browned, about 20 minutes. Strain over a mesh strainer lined with a paper towel. Cool to room temperature. Set aside. While butter cools, generously butter madeline pans. Using a tabletop mixer, whisk the eggs on high speed for two minutes, until doubled in volume. While the mixer is still running on high, slowly add sugar. Whip an additional 2 minutes until light and slightly peaky. Turn off mixer and gently fold in the lemon zest and vanilla. Sprinkle flour over the egg batter. Gently fold in. Last, gently fold in butter until just combined. Spoon into madeline molds 3/4 full. Bake 12-14 minutes or until madelines are browned on the edges. Remove from oven. Unmold immediately. Cool on wire racks completely before dusting with powdered sugar.